by Marketing
in Blog
Comments

One of the most interesting or fun things, from my point of view, is to see bands’ album covers on display in a record shop. Besides seeing the musical trends of the bands themselves and an approach, or rather a daydream, of what we will be able to hear after we buy the album or the cd, when we see the album cover we may even be a bit co-participants in the philosophy or spirit of the group. Who has never stopped at any record line, has quickly gone through hundreds of options until often reaching one that, although unknown, calls our attention? Perhaps their colors, photography, graphic design and even the typography itself make us, almost from the beginning, get a little closer to the group in question.

It’s quite a story with the 1975 Supertramp album “Crisis, What Crisis”. Against an industrial, gray, dirty, and clearly provocative background, there’s a person in front who, within all that environment, allows himself the luxury of sunbathing. With his sunshade, his bathing suit, and a table with a soft drink, he is still impassive and happy not to see reality, which is happening right behind him. 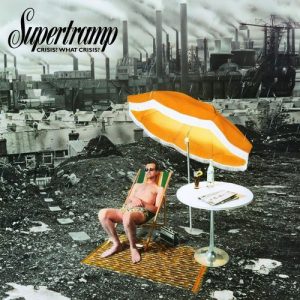 The truth is that each one of us interprets music and culture, in general, the way we want. The illustration on this album suggests these ideas to me, perhaps as a metaphor for today:

It’s a pity that vinyl is something residual, just as the days of the CD are practically numbered in face of the new music download media, but it’s obvious that within the current vertiginous rhythm, within the chaos of the global phenomenon, within the new forms of social relations and within the day-to-day stagnation to which it leads us, I’m sure that currently, the main key is to know how to live with the crisis and to see, if there is one, the positive side of all this.

The man sitting in the sun, the man who simply smiles and is happy in front of everything that is going on behind him, suggests to me the new modern social being, readapted and socialized to the new environments, imitating the new forms of leadership, decision making, and global thinking. It is likely that this is all nonsense because the cover seems to be a parody, but it is no less true that we must coexist with new forms of development, new forms of work, and new social behaviors caused by a new form of global interrelationship.

José Ramon is a WFM specialist and has extensive experience in human resources. Given his passion for culture, he was the host of the television show ‘La nueva ruta del empleo‘. His greatest hobby is writing, being the author of 4 books: ‘Otto, (Editorial Hades 2019)’, ‘El baile de las ortigas (Editorial Haces 2017)’ and ‘Deconstrucción de una lágrima (Editorial Hades 2014)’ and the non-fiction book ‘Películas, buenos consejos y cómo encontré trabajo‘.

<
>
We use cookies on our website to give you the most relevant experience by remembering your preferences and repeat visits. By clicking “Accept All”, you consent to the use of ALL the cookies. However, you may visit "Cookie Settings" to provide a controlled consent.
Cookie SettingsAccept all
Manage consent